The Chilean president, Michelle Bachelet, has introduced a bill to legalise gay marriage, a move that follows a string of liberal reforms in one of Latin America’s most conservative nations.

In 2015, Chile’s congress approved same-sex civil unions after years of legislative wrangling. In March, Bachelet, a centre-left politician, pledged to send a full marriage bill to legislators before the end of the year. On Monday, she fulfilled her promise. 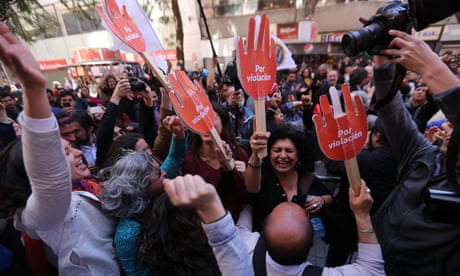 “We do this with the certainty that it is not ethical or fair to put artificial limits on love, or to deny essential rights just because of the sex of those who make up a couple.”

The bill is expected to allow same-sex couples to adopt children. The move comes a week after Chile’s constitutional court approved a landmark bill that will allow abortion in some circumstances. Before that, Chile was one of only a handful of countries in the world that outlawed terminating a pregnancy in any situation, including when a woman’s life was in danger.  Bachelet’s push for marriage equality also comes as countries across the region are expanding gay rights. Same-sex marriage has been legalised in recent years in Argentina, Brazil, Uruguay and Mexico, despite the powerful influence of the Catholic church, which opposes such unions.

It was not immediately clear if Bachelet will be able to push the gay marriage bill through congress before she leaves office in March 2018. Though her Nueva Mayoría coalition has a congressional majority, it is severely fractured ahead of elections in November and several members of the coalition hold socially conservative views. Former Chilean President Sebastián Piñera has said he opposes the bill. “There should not be discrimination, but at the same time the essence of an institution such as marriage should be respected, which has always been about conserving the human race,” he told the BBC. Gay rights activists have welcomed the move.

“It’s the beginning of the end of discrimination based on sexual orientation to access marriage,” Luis Larraín, president of the Iguales Foundation, told the Associated Press.